NomNom and the BIAF award

I was participating on a short animation idea competition held by BIAF (Baros Animation Festival).  So I made a story, design character, storyboard, and of course the concept of an animation.  The theme was deforestation and reforestation.
The character for my animation named NomNom, a monster who lives in the forest and eat everything. He can eat as much as he can, and once he started, he can't stop before everything is gone.
the same problem with deforestation,  the deforestation major cause is actually not illegal logging but the greediness, and we (who live in the city) share the same responsibility as the people who cuts the tree.
NomNom eat more than he needs and before he realize, everything has gone.  Pretty similar to what happen to human.  NomNom is a cute monster, and human could also become a monster.  So Are You a NomNom?
I designed the short animation as a part of a campaign, so I also designed a website too.
all this was just a concept, if you are an organization or institution who concern about environmental issue and you are interested to funding or working together to make this project comes true, please contact me :) NomNom and the trophy
the animation sample were made in 2D, but there's a possibility that it could be done using stopmotion. 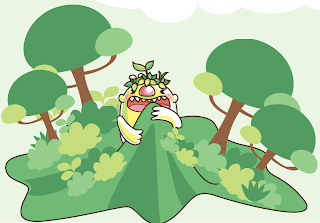 NomNom and The Forest.
The forest is designed like a wide cloth that could be pulled like a blanket 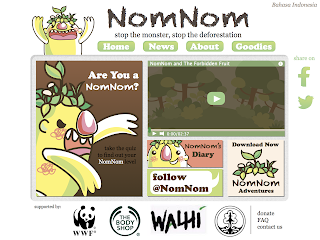 the website design,  there are actually some more pages.  it's just a dummy, I just grab some logos of the organization and institution who are concern about environmental issue.

Posted by zuperdzigh at 8:33 PM No comments: 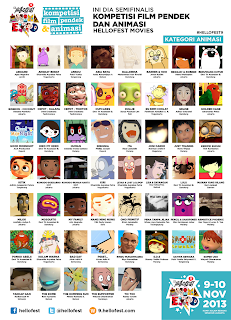 it's just the semifinal, I don't have the confindence that I will be on the final so...
I won't wait for the next moment of fame, cause the chance is low.
Let's celebrate that I'm on the Hellofest's animation competition semifinal with my 6 animations.
quantity over quality and I'm proud of that.

PS: sorry for being lame :p

Posted by zuperdzigh at 6:36 AM No comments: