I think when someone saw my amigurumi photo from another site,
most people will search for "zuperdzigh" because there's zuperdzigh logo in most photos.
well I'm a designer/animator by day, and crafter by night, somehow I need to divide it into different blogs.
Zuperdzigh for my generally design related post, while Zpiderdzigh is for amigurumi.
so.. Just in case you are looking for the amigurumis, it's here: 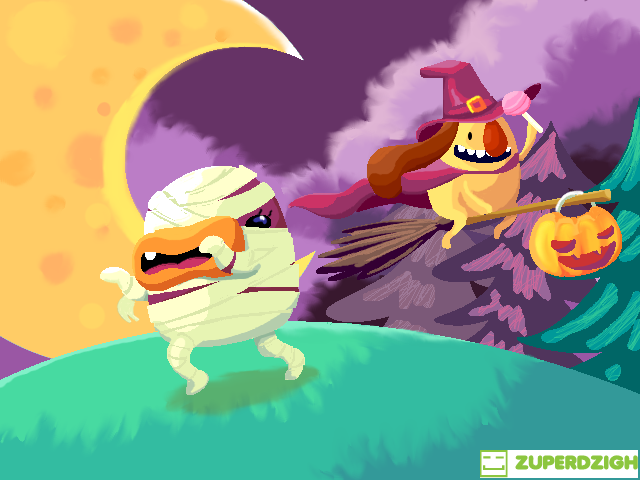 it's kinda unprofessional, instead of doing my to do list, I was working on this illustration because it's Halloween.
the trees textures are crappy cause I was in hurry to finish it  and working in GIMP using mouse is hell.
I made a big mistake when starting this drawing, I forgot that it's not vector, and I forgot to change the default resolution. So after finished the color base, I redo the drawing from the beginning.  Totally wasting time.
anyway... Happy Halloween!!!!

if only it's not Halloween but it's Christmas, I would ask for a new graphic tablet for me :)

Posted by zuperdzigh at 2:47 AM No comments:

from the archive: Indiana Jones

I was quite busy, so I haven't make anything new, so I browse my archive and found a comic I made about 7 years ago.
it was an assignment for the basic Illustration subject, to make a comic book based on your favorite movie.

Mine is the Indiana Jones and the Temple of Doom.
I didn't remember how many times I watched the movie. 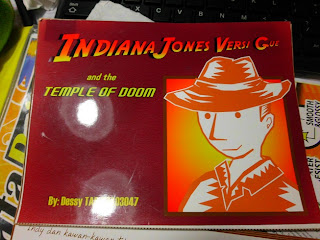 my version of "Indiana Jones" 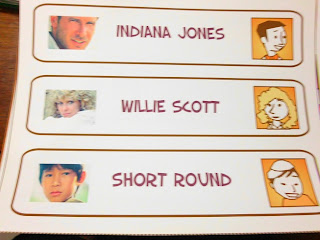 my drawing back then, using corel draw.  Hahaha.. it's so "smooth" 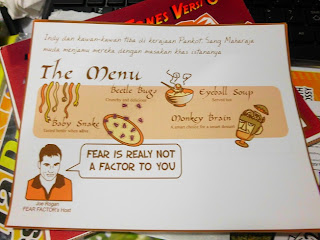 my favorite part, the Monkey brains, and also Joe Rogan from Fear Factor 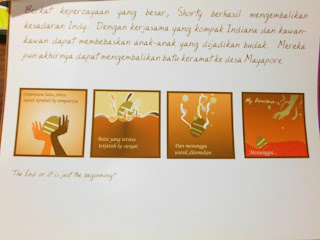 most of the comic page are like this, 4 panels of mixed story from various movie
By the way, the comic are in Bahasa, and right now I can't use my scanner, so you can't read the whole comic.
ah someday, I'll make the monkey brain fan craft too :)

Email ThisBlogThis!Share to TwitterShare to FacebookShare to Pinterest
Labels: comic

found this texturing tutorial by kiwin upt uo
and tried it

do you see what's missing?
I forgot to put the shadow :p
it's kinda funny after using flash for years, making animations become so easy, then back to traditional frame by frame animations
Posted by zuperdzigh at 7:33 PM No comments:

I'm a new GIMP user and I still trying to explore the uses of GIMP,
I'm not into photo editing, so let's skip that part for now.
just like photoshop, GIMP can also be used to make Gif animation,
and I tried to make an animated pixel art.

the character was Beruang (=Bear or having money), based on a doll I made recently (oh so predictable).
Beruang has a lot of money, he ain't Uncle Scrooge, He loves to throw the money, cause he is so D*mn rich.
I wish I were Beruang.
I think my next task is to learn making grass texture and clouds.
Posted by zuperdzigh at 6:54 PM No comments: 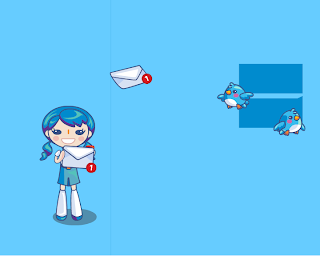 while still searching for jobs, I made this animation for Increfest 2011,
a local animation and game competition held by the Department of Industry.
I knew about the event about 2 months before the deadline.
I was inspired by the social media trend among Indonesian teenagers.
I made the story with similar idea about last year, but never finished the animation.

I designed the character using avatar concept, a simplification form of the user's profile (umm.. I don't know how to explain it correctly)
the character design was done 2 months ago, but there's no progress at all for the animation until it was only 1 week left before the competition deadline.
so on the last whole week, I arrange a new BGM, a storyboard then the animation.
and there's a lot of trouble happened during the process, such as broken files.
you'll see that the first scene on the animation is kinda blurry, it was because of the original file was broken,
and I don't have enough time to recreate the scene.
and I actually did create the same scene twice.  Both ended up broken and can not be fixed or edited at all.
luckily, it finished right on time :)

I guess I'm the luckiest animator, cause I was chosen as one of the ten finalist over 64 competitor, and also won the best character award :)
tho I must admit that my animation is not as good as the other animation, I still have a lot to learn.
Thanks anyway

you could read the side story too in my knitting blog
Posted by zuperdzigh at 8:41 PM No comments:

while gathering a lot of GIMP tutorials, I found that it could also be used to make pixel art (here's the tutorial)
so I give it a try. I spent my morning doing these:

the object are the same, Anying & Teyong and cupcakes.

I tried to make pixel art a long time ago but never had a time to improve it again until today.
(and also because I'm a photoshop dummy)
now that I learn GIMP maybe I will try to pixeling again
Posted by zuperdzigh at 12:03 AM No comments: 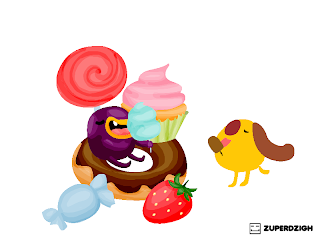 this is the Day 1 result, shading using burn tool 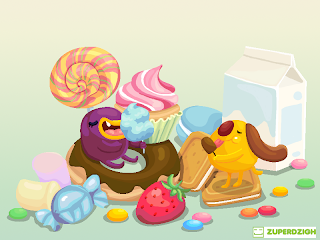 and this is the 2nd Day result, I'm quite happy with this result 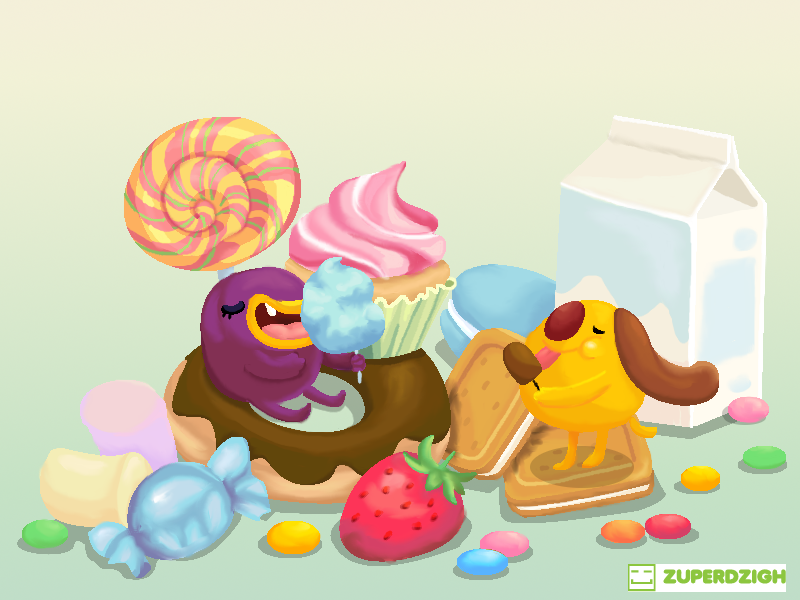 this is also 2nd Day result, with a little bit smudging

can't say I master it, cause I don't know if I'm using the tools and layers correctly.
and really I wanted to give up, since making lineart in raster is very frustrating, especially when you don't have pen tablet and scanner

and I know I still have to learn photoshop too.. but for now I think I will try GIMP some more.
any advice and comment are greatly appreciated :)

Posted by zuperdzigh at 11:16 PM No comments:


I recently found that I really like drawing sweet sugary food,
tho I'm not sure I'd love to eat real cupcakes.

anyway did I wrote Anying & Teyong has a lot of violence act? not this time,
but Teyong is constantly cruel >:)


Posted by zuperdzigh at 8:43 PM No comments: