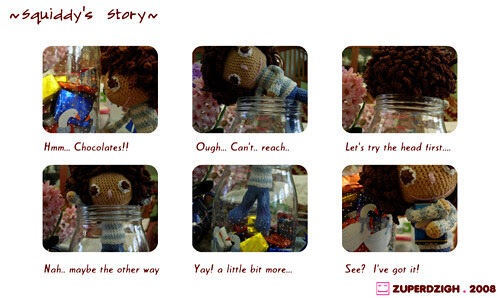 Squiddy is one of my favorite character that I made. Yup, he is on the top banner in this blog too.
As you can see, he is a boy, not a squid. His real name is Edward, but the other call him Squiddy, because his hair is like squid's tentacles.
I created him on 2002 for the "seventh ocean" comic, but until now, I still haven't finished the real comic. (Oops!). At the end of 2007, someone offering me to make comic strip for a local magazine. So I make a spin-off of "Seventh Ocean", and then Squiddy got a local name, Ujang Kribo ( a pretty corny name, which means Curly boy).
Now, I made an amigurumi version of Squiddy, I call him Akang (which means older brother). I took almost a month, just to make his hair (one by one), I told to myself that Squiddy's price will be at least 200 euros. Because it took a lot of my patience, and almost makes me crazy. And now the head is heavier than any part of his body.
However, I never mean to sell any of my amigurumi.
I'm proud of him, because maybe i will not make any amigurumi with those kind of hair again.
The upper image is the comic version of the amigurumi Squiddy, and the one below is the comic for the magazine.
more?
Posted by zuperdzigh at 2:13 AM 2 comments: